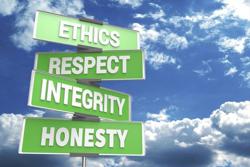 Little League Baseball is constructed to be a safe, fun and competitive experience for youngsters. The program fulfills the promise of these objectives as long as participants at all levels and ages: players, umpires, fans and coaches alike, practice good sportsmanship toward each one another at all times. Positive reinforcement for players, teams, etc. is encouraged and always welcome. Little League is not a place to express negativism toward anyone. Displays of unsportsmanlike conduct, such as abusive language by any participant detract from the quality of the experience of Little League for everyone. Poor sportsmanship is unwanted, unwelcome, unappreciated and will not be tolerated around Little League activities. Once a game has begun; the umpires rule that game, RIGHT OR WRONG. There are published procedures for protesting rules interpretations, but subjective calls may not be questioned. Please limit the expression of any dissatisfaction with the umpiring to a call to the League President (president@mtllb.org) following the game.

All suspensions and Terminations will be addressed by the Executive Board hereinafter defined as the Macomb Township Little League President, Vice President, Treasurer, Secretary and associated Player Agent(s).

Resignation or action of the Executive Board may terminate Membership as follows.

(a)   The Executive Board shall have the authority to discipline or suspend or terminate the Membership of any Member of any class, including managers and coaches, when the conduct of such person is considered detrimental to the best interest of MTLL and/or Little League Baseball. The Member involved shall be notified of such meeting, informed of the general nature of the charges and given an opportunity to appear at the meeting to answer such charges.

The Executive Board shall have the full power to suspend or revoke such player’s rights to future participation by two-thirds vote of those Board Members present at any duly constituted meeting in which a quorum is present.

“The action of players, managers, coaches, umpires, and league officials shall be above reproach.”   Anyone who violates this Code of Conduct will be subject to the disciplinary actions set forth by this document. The authority on discipline will be the sole responsibility of the MTLL Executive Board and their decision will be final.

This section is a guide for the disciplining of MTLL Members, guests, and other spectators or participants attending other MTLL functions or meetings, for violations of certain rules and regulations. The objective is to maintain objectivity in disciplining Members. However, since the below offenses may be of varying degree, first or second offenses of a serious nature may be dealt with under Article III, Section 4 of the Macomb Township Little League Constitution and By-Laws.

Note: Members include players, parents, grandparents, family Members, managers or any volunteer, league official, and any other spectator or guest on MTLL property.

Note:  All suspensions or expulsions from the league are procedurally covered under Article III, Section 4 of the MTLL Constitution and By-Laws, which requires a hearing for discipline.

A.   Severe Infractions: MTLL considers all infractions under this section to be the most serious in nature and carry at least a requirement for suspension or permanent expulsion from the league.

a.    First offense: Expulsion from the league

1 - Repeated or uncontrolled questioning of an umpire’s ruling

2 - Repeated heckling of the umpire during play. The umpire shall request that the coaches speak to the offender.  If the behavior continues the offender shall be ejected.

3 - Approaching an umpire after any game to discuss the umpire’s performance during the game.  Such misconduct will result in the following penalties for the offender:

1.    Players/Coaches to remain in dugout

2.    Only Batter May Pickup and Swing Bat

4.    Interference with game or players – Members, guests, and other spectators or participants are prohibited from engaging in any actions which interferes with the game or the players such as noises which are intended to disrupt pitchers, hitters, or fielders during the game.

6.    No Member, guest, or other spectator or participant shall engage in actions, which are intended to delay the game.

For infractions under this section B. Miscellaneous Infractions, the following actions/penalties shall be taken:

1.  Child Abuse is a violation of state law.  Anyone who observes what they believe may be child abuse should immediately report this to law enforcement authorities and league officials.  The league will immediately take every necessary action to protect the children within this league.

3.  Discrimination based on race, color gender, ethnicity, national origin or sexual orientation will not be tolerated by Canton Little League.  All reports of discrimination shall be immediately brought to the president of the league and a hearing conducted under Article III Section 4 within 7 days.  No player, Member, guest, or spectator shall be treated differently than another similarly situated person on the basis of his/her race, color, gender, ethnicity, national origin, disability or sexual orientation.

Any other complaints of misconduct by Members, which are brought to the attention of the Executive Board will be interpreted for action based on the regulations noted in Section V, below (i.e.- Article III, Section 4 of the League’s Constitution and bylaws).